I was thinking aloud on Twitter tonight and thought it would be good to write some things down.

The crazy, Marxist push back on Thanksgiving always bemuses me. I mean, who hates Thanksgiving? I love Thanksgiving. It's a warm, relatively low key, family-and-comfort-food-oriented holiday thoughtfully placed on the calendar in the bleakest part of autumn. It's true that it can be a lot of cooking and baking, but there's no requirement to serve a 20-pound turkey and seven sides.

Besides the usual attempts to torpedo Thanksgiving with absurd white guilt, there's the bitching about how cooking enslaves women (please). And this year some SJWs tried to conflate holiday family interaction with oppression and killing of the Black race.

I've made peace with the fact that SJWs are mentally ill, but I still do not understand the loathing they have for white men. In the history of humanity, women have never had it better in terms of freedom and social mobility than white women do, particularly white women married to white men. Does that mean all white men are good? No. As in every population, there are any number of violent, unstable, and difficult men. But in my experience, those men are in the minority. Most of the white men I know and have known have been very good to me, and frequently kind and solicitous. (I won't comment on other ethnic groups. I interact largely with middle and working-class white men.)

Haven't these SJWs seen a group of middle-aged men show up on a Saturday morning to move all of a parishioner's household goods to a new apartment? I have. Haven't they seen guys bring chain saws and axes to clear roads after a big storm? I have. I've also had men walk me home, fix my car, drop off yards of free mulch for my yard, and offer me work when I needed it. My sister's father-in-law once drove to the state capital to get a document apostilled for me when I needed it in a hurry and couldn't get it done myself. (That man can get anything done.) All of these services were done without a hint of payback, by the way, either sexual or otherwise. 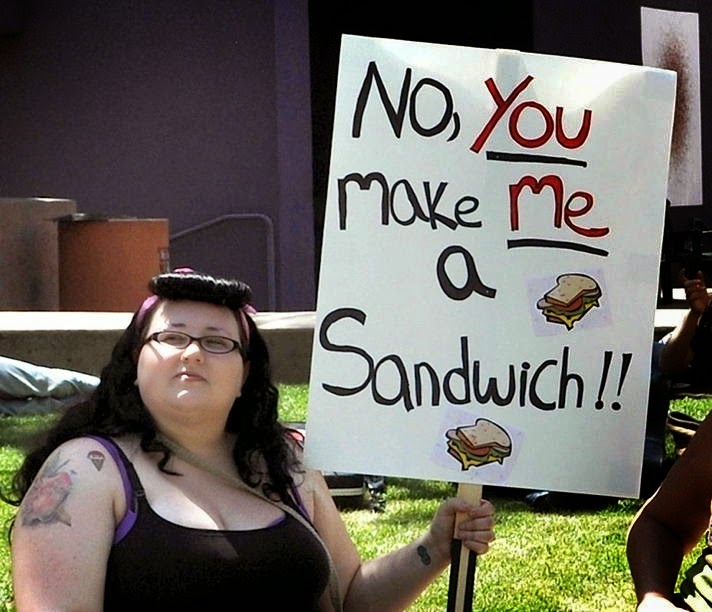 What I think has changed - and perhaps this makes the SJWs experience very different from mine - is that women no longer interact with men in the traditional ways that set up a more positive dynamic between them. It used to be that older women of some station or qualities had rather a significant amount of influence over men, which, given their lack of sexual allure, seems inconceivable today. Now women have all of the power they will ever have when they are young and at their sexual peak. And, generally, they squander this power or deliberately abuse it instead of focusing it on loyalty building through nurturing and relationship building. When they are older, then, because they have not cultivated those important ties, they wind up like Liz Jones complaining about being lonely, poor, and ready to die.

It's all so bizarre. Women are natural nurturers; they've evolved to be this way. Check out Tumblr if you think the desire isn't there. It showcases thousands of girl blogs full of pictures of puppies, kittens, and baby hedgehogs propped in baby-like poses. Or browse Pinterest for the plethora of homemaking adventures and craft projects pinned there. But instead of embracing these female yearnings in the traditional vocations of wife and mother, girls online are writing thousand-word essays on the lack of bad-ass role models on TV and writing gay slash fiction about apparently heterosexual Harry Potter characters.

It's a little stated fact that this female nurturing, while requiring considerable effort and self-sacrifice, it sets up more positive interactions with men (and, for that matter, people). Feminine behavior like cooking, baking, tending, touching, listening, smiling, laughing, and singing, brings out the protective nature of men and sets up a natural, positive give-and-take between them. Whereas a bitchy, kick-ass persona actively repels most men. It's very counterproductive.

Women can't compete physically with men. Period. And the vast majority of them don't even seem to want to compete in traditionally masculine high-stress endeavors. Given this, women would be far better off building affection, respect, and loyalty by developing their natural caring abilities.  And I don't mean to say that in some kind of stick-to-your-knitting, condescending way. I don't think women are only good for a handful of uses or that they cannot make contributions in any number of ways. You can have a career and still interact with people in ways that makes everyone's experience more positive. However, I don't support women who only want to bitch about how there aren't enough women in STEM careers or in CEO positions or making boatloads of money writing simulation software or having their games developed into the next big thing.

As far as I am concerned women have a choice there. They can either excel at the things men excel at, expending their own time and energy, or they can develop more cooperative strategies. Complaining endlessly about "male privilege" and attempting to shame successful people may seem like an easier path, but it's going to go nowhere given the relationship between the sexes right now.