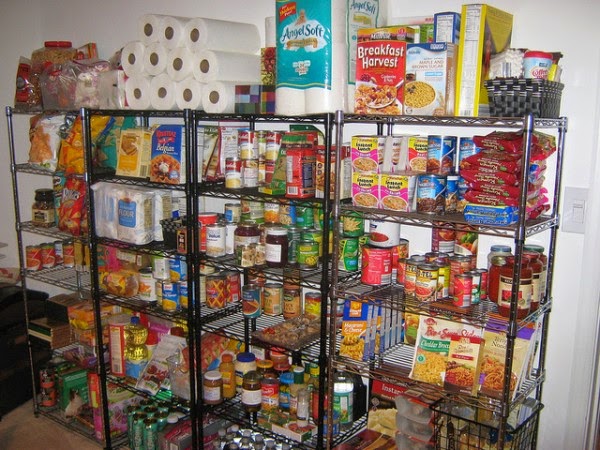 One of the things that I was grateful I had done when we found out my husband was being laid off was to have fully stocked my pantry. Between that and the freezer we could have eaten for a couple of months, at least, although thankfully it didn't come to that. It was still a huge load off my mind when I was calculating expenses that we would have enough food to eat, no matter how long unemployment took to kick in. And it took a long time. I don't know how families without any savings do it.

Yesterday I also restocked my freezer with meat and fish from the coop, enough to make it through at least several months. I've purchased a half a pig as well from my local farmer who puts them out in his fields to fatten them up for fall. I'm splitting it with a friend since we both have smaller families. Last December we got a quarter hog's worth of meat, and it filled my freezer up. Meat is so expensive right now that buying it in bulk, even free range as I prefer, often costs less than what's in the grocery store. You do have to be organized in how you use it, though, because more than six months in the freezer is bad for most meats.

Many staples last in storage indefinitely, though. Beans, rice, split peas, lentils, wheat berries (if you own a grinder) all can last for years without spoilage. My pantry also has sugar, honey, and agave nectar, condiments, spaghetti and other noodles, canned fruits and vegetables, an embarrassing amount of tea leaves, as well as oils and spices and medicinal herbs. I have perhaps 40 gallons of water in storage as well. I put 3 drops of bleach in each container to keep it from molding. I've never had to use much of it, but the bleach will quickly evaporate once uncapped and then it will be safe to drink.

Other things I keep about in case of emergency: batteries, flashlights, extra blankets, a battery operated shortwave radio, a crank radio/lantern, camping gear, and a complete medical kit (with surgical tools and a number of spare bandages). I also have ibuprofen, Tylenol, and aspirin, elderberry elixir, as well as an additional stock of any medicines we regularly use.

The medical supplies could easily come in handy during an extended electrical blackout, blizzard situation, or epidemic. This has been on my mind be cause of the uncontrolled Ebola outbreak in West Africa. While I don't believe the disease would spread nearly as fast in a first world country with a complete infrastructure and advanced medical care available, I do think we will see cases in the U.S. before long, given the entirely insufficient attempts to limit travel to and from West Africa or quarantine asymptomatic people who have recently been there.

Fortunately Ebola is not an airborne disease, but influenzas are and all we'd need to bring the world basically to an at least temporary stop is one virulent and highly infections avian or swine flu. No matter how prepared cities and hospitals feel they are for an epidemic, the fact remains that as a society we don't know how to deal with mass illness or large amounts of infectious medical waste. Even professional cleaners used to disinfecting don't know enough about the sterilization required in such an emergency, and although medical supplies are generally not in shortage, that could change rapidly if there is enough sudden demand.

You can't always control your circumstances, but long term planning for a number of eventualities can make challenges easier to manage when they do arise. Stock up now.
Posted by grerp at 2:34 PM