Piece of Advice #110: Don't wrap your kids up in cotton wool. 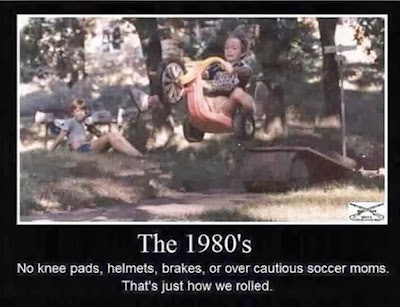 Did you have a Big Wheel?  I had one, the ugly orange original, not some fancy, rigged up glitter princess one.  Remember how loud they were, that plastic grinding against the dirty blacktop?  What a great memory.

Gosh, and remember when kids wore shorts that short in a completely non-sexual way?  I spent much of the 70s (by 1980, being 9 years old, I wouldn't have been caught dead on a Big Wheel) hanging out in hideously ugly green/yellow/orange androgynous polyester two piece pants sets.  And my hair was like that boy's.  Ugh, what a horrible decade for fashion.  But, man, as kids we were still allowed to do stuff.

One summer my sister and I built forts out of wooden pallets left behind by the developers who carved out my suburb and stopped more or less with our house.  They dumped a whole box of nails and all kinds of 2x4s and pressed wood a big ravine they dug out behind our house (Hill #1), and we dragged all of it up the hill and got out our dad's hammers and went to work. We made this rag tag shack fort and we were so proud of it.  The boys from a street away came and tore it down in the night, and we vowed we'd build it again.  And we did.  Again and again.  Stepping on rusty nails did not stop us!  Ripping open our scalps on broken wood from low door "frames" didn't stop us.  We had the best time getting sunburned and scabbed and poked and cut and showing those boys we would not be defeated.

We walked and biked all around our neighborhood, all day long in the summer.  I don't even know if my mom even knew where we were.  We were just supposed to be home by dinner and not watch TV. We'd ride over to the park and swing on the rusty swings and fling each other off the paint chipped merry-go-round.  I distinctly remember riding the steep hill down Packer Dr. with my feet on the handlebars and my hands up in the air and, of course, no bike helmet.  No one wore a bike helmet.  No one.  I didn't tell my mom about the feet on the handle bars thing, though.  No, I did not.

There were creepy adults in the 1970s and 80s, but we didn't look at adults as creepy.  Now as parents we read all the time about sex offenders and kidnappers and closed head injuries and we want to protect our kids against all of that.  Of course we do.  But we're getting pretty paranoid.  There's no real reason toddlers need to wear helmets on their scooters.  They're not going very fast and they aren't going to be out of the supervision of adults.  But I've seen all kinds of moms apologize for their tiny kids being "in danger" from not wearing a helmet.

My son rides a bike and a scooter and roller blades and I've never been able to get him to wear one.  I also can't get him to put a coat on for half the winter, let alone mittens or gloves.  I do not let him wander about the neighborhood because we live in the city, only a couple of blocks away from a middle school in which my cousin's wife remembers seeing one girl shiv another with nail file in the hall.  The houses across the street from the school have had any number of break ins too.  He plays in the park and walks the neighborhood, but I wouldn't be comfortable saying, "Be back by dinner."  I just don't know my neighbors like we knew the neighbors growing up - and I have tried.  Three different neighbors moved out this year, ones I'd gotten to know some.

Still, I let my son climb trees and slide down icy hills in winter.  I don't make a big deal out of it if he get a boo boo.  Cuts and bruises and scabs and scars are a part of growing up.  Life is full of pains, large and small, and if he doesn't learn to deal with them now, he'll be too weak to deal with larger problems later.  And I'd prefer that he not turn into a huge whiner who thinks it's other people's responsibility to shelter him from any and all adversity in life.  If you let life be the teacher and hand out consequences for homework, they'll learn some important lessons earlier on and probably be more pleasant to be around in the here and now.
Posted by grerp at 8:04 PM