At the risk of being accused of pulling a "Kids today..." curmudgeonly rant, it does seem like many young people are deliberately making themselves unattractive, and I do not understand for what purpose.

And I'm not talking about the tattooing/piercing/branding trends, although I find myself horrified by those as well.  I get that those are a fad, fed by our narcissistic cultural urge to be unique while still being conformist.  I'm talking about people who seem to want to make themselves look as ugly as possible. 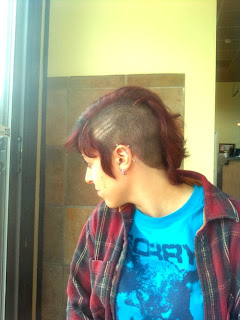 This week my family and I were standing in line at a store and two young women came in.  They both had shaved their heads in some sort of hideous long Mohawk, but the second one was also grossly overweight, had two sets of spacers in her earlobes (in orange and green), and was wearing an incredibly sour expression.  Everything about her was off-putting.  I tried imagining what she would have looked like circa 1985 (or, heck, circa 2000), and while she would never have been stunning, under different circumstances, she could have been attractive.  But everything she had done to herself made her look more tribal, more sullen, more hostile, and it had to have been deliberate.

Was she motivated by some sort of self-loathing, I wondered - did she choose to repel people rather than wait for them to reject her?  Or was this some sort of political or sociological statement she was trying to make?  Was I supposed to notice her or was I supposed to avert my gaze?

A week or so ago the local shelter put up pictures of new dog and cat adoptive families, and one couple was strikingly unattractive.  Both the man and the woman were heavy and dressed like itinerants, but the woman had dyed her spiked hair a fluorescent pink, and had an illustration from The Giving Tree tattooed all over her shoulder and arm.  Why, why, WHY?

Neither of these women were physically ugly in their basics, but they had made themselves so with their clothing/ornamentation/lifestyle choices.  I'm not talking about people who have let themselves go or people who, for instance, have inherited unfortunate dental problems but can't afford to get braces.  I understand laziness and poverty.  But I don't understand self-sabotage.

The fact is that even if you are not in the dating market, your appearance does affect how people perceive and, therefore, treat you.  Your choices about what you wear and choose to look like affect the choices people make in how to treat you.  We all may secretly dream of being treated according to our inner selves, but people judge you on what they see, and if you look scary, hostile, threatening, sullen, unapproachable, outlandish, or just plain ugly, they will treat you worse than if you were beautiful, attractive, or even plain.  Most of us aren't beautiful, but we can at least strive for clean, pleasant, and unremarkable.  You may think, "I'm not interested in meeting anybody," or "I'm not looking for a job," but the way you present yourself now affect the way people will feel about you and talk about you when recommending (or not) you for anything in the future.

So don't wreck your looks on purpose.
Posted by grerp at 12:28 PM