Piece of Advice #97: Look farther into the future

So I read the Kate Bolick article in The Atlantic that both Dalrock and Susan Walsh have commented on in the past few days, and in my mind I've been juxtaposing it with the posts found over at We Are the 99 Percent.

The thrust of Bolick's piece is that, yes, marriage is dying, but that this is not necessarily bad news for women because serial monogamy and other alternatives to marriage can be just as fulfilling, if not more so.  Bolick says that she doesn't regret, at 28, throwing away a relationship that could have been permanent for reasons she is still unable to entirely define, even though no equally enjoyable or promising relationship materialized for her later.  (Which makes her quite different in prospective from Lori Gottlieb, also of The Atlantic, whose Marry Him thesis is, more or less, "Any port in a storm," - storm being defined as, "in your mid- to late thirties.")

Bolick tells us that she isn't lonely, that her life is rich and fulfilling and full of friends who support her and offer her their plush digs in which to crash.  She doesn't know if she wants children, and the men available to her now are unpalatable.  Under those conditions who needs a husband?

The problem with this whole thesis is that while being permanently single may be a fulfilling and rich way for women like Bolick to lead their lives, it doesn't work as well for women who are 1) dumber, 2) poorer, 3) less intrepid/independent or 4) not possessed of generous friends of significant means.  And it works really badly for women who want to raise healthy, well adjusted, non-poverty stricken children.  The fact is, most women aren't very much like Bolick at all - which is why most women want to get married, because subconsciously they know, despite all the feminist propaganda that portrays marriage as a one-way trap to stifling, abused servitude, that marriage is a good deal for women.  Women are smaller, weaker, more risk averse, more comfort seeking, and are rarely the kind of trail-blazing, money-making geniuses who can sit alone atop a heap of money and adulation.  Almost all of them will eventually want babies too which will make them physically, emotionally, and financially more vulnerable than women like Bolick. 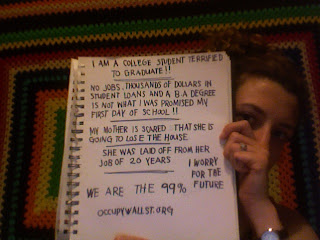 One of the themes that emerges from the We Are the 99 Percent posts is fear/anxiety.  Over and over the posters, the majority of which are women, say they are scared.  They don't know what is going to happen.  They fear for the future if the government doesn't swoop in with the jobs, the debt forgiveness, and the free healthcare.  The fact is that women are already the biggest users of the social safety net in terms of welfare, food stamps, WIC, subsidized housing, childcare vouchers, etc. Since they are largely covered for at least the basics of food and housing, what they are essentially demanding, then, is the eradication of risk.  All risk.

While the economic situation is very complex, the timing of this tremendous outpouring of fear and despair is not coincidental.  We are now at least three generations deep into the destruction of the traditional family.  Boomer women came from intact families many of which would provide backup if and when they crashed and burned in their youth.  Gen X women had a more fractured family landscape, but previous recessions were not as dire and grandparents often pitched in.  Millenials, on the other hand, may come from a family tree with hardly an intact branch.  Their Boomer parents can't afford to aid them because they need their own help.  Forty percent of Boomer women are single and hardly any of them are adequately prepared for retirement.

I've heard many women say that they don't need men, that they are too much work and that these women value their time, space, and freedom.  And it's true that childless women in their middle years may not need husbands.  They are still working and most have not had health complications.  But with age comes vulnerability.  Women of yesteryear knew they could depend on their husbands and children to help them as they aged, if they had done their duty to their families.  Who is going to do that for a single woman?  A nephew?  A good friend?  I remember visiting my Great Aunt Lola when she was dying of cancer twenty years ago.  Her husband of fifty years, a man I'd known as a rather absent-minded professor, obsessed with books and rather indifferent to the human condition either abstract or practical, tenderly doted on her as she lay on a cot in their small sitting room.  Day after day he cared for her as she had cared for him throughout their lives.  And when she died and my Uncle Ed became senile and frail, their oldest daughter came and took him into her house and cared for him until he died years later.

Who is going to tenderly care for the wave of single women entering into old age?  Or the middle-aged ones who have compromised their health early with unhealthy habits and obesity?  Not their husbands.  Not their children.

So many women I've know stubbornly refuse to look beyond tomorrow, but life is long and, often, hard.  I read this on Facebook the other day:


Boys play house...Men build homes!!! Boys shack up...Men get married!!! Boys make babies...Men raise children!!! A boy won't raise his own children, a man will raise his and someone else's!!! Boys invent excuses for failure...Men produce strategies for success!!! Boys look for somebody to take care of them...Men look for someone to take care of!!! Boys seek popularity...Men demand respect and know how to give it..BOYS DO WHAT THEY WANT, MEN DO WHAT THEY CAN & MORE!

The woman who posted it has three children from two different men.  She is stuck in a mediocre paying, dead-end job.  She divorced her first husband because marriage wasn't fun, then shacked up with a series of less and less stable men until she threw the last mooching bum out a year or so ago.  She is 40.  Now she is seriously looking for Mr. Right and says she won't settle for anything less because she's worth it.  The handwriting on her wall was written nearly a decade ago when she had her second and then third illegitimate child: life-long poverty.  Her parents have helped her out over and over.  She never pays taxes, but always gets a big return in April because of her head of household status.  She wants a bailout, but fails to recognize that she's been perpetually bailed out for the decisions she deliberately made her whole life.  She will not be in a position to help her own children, and they will need help.  Oh yes, they will.

This woman is far more representative of most women than Bolick will ever be.  Read the above paragraph again.  Does it sound like she thinks she's better off on her own?  No. 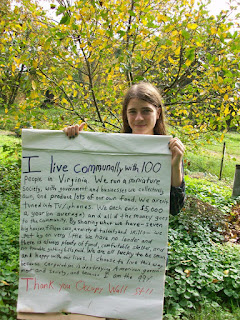 There are, of course, alternative ways for people to care for each other outside of the traditional family, as Bolick mentions when she talks about the Begijnhof, a former Dutch religious collective. However, these types of communities generally constrict an individual's freedom with rules they make for the peace and betterment of the community and require self-sacrifice as well as long-term service to others.  You can't spend your life having adventures and spending all your time and money on yourself and then show up sick and needy on the doorstep of some commune at age 65 and expect them to take you in.

It's interesting the romantic way Bolick describes this women-made "nest." For her, when women make the rules, the idea of “If you want to live here, you have to adjust, and you have to be creative,” isn't stifling or repressed, it's liberating.  Hmmmm.
Posted by grerp at 7:40 PM