As I mentioned in part 1 of my examination of The Fourth Turning, Strauss and Howe described Gen X's childhood as "left unprotected at a time of cultural convulsion and adult self-discovery."  Later in the book they expand on this:


"As the media standard for the typical American family changed from My Three Sons to My Two Dads, divorce struck 13ers harder than any other child generation in U.S. history.  Where Boomers had once been worth the parental sacrifice of prolonging an unhappy marriage, 13ers were not.  At the end of the High, half of all adult women believed that parents in bad marriages should stay together for the sake of the children, but by the end of the Awakening, only one in five thought so.  Best-selling youth books like It's Not the End of the World tried to show that parental divorce wasn't so bad, but left children with the impression that any family could burst apart at any time.  In The Nurturing Father: Journey Toward the Complete Man, Kyle Pruett promised that family dissolution "freed" parent and child to have "better" and "less-constricted" time together.  By 1980, just 56 percent of all 13er children lived with two once-married parents, and today this generation's novels and screenplays bristle with hostile reference to parents who didn't tough it out."

I read Strauss and Howe's 5-page description of the built-in craziness of childhood in the 1960s and 70s nodding the whole time.  Someone is finally saying it: Gen X had a shortened, unsettled, unstable childhood and it permanently affected the way we see the world.  Permanently.  Affected.  Permanently.  Latchkey kids were left unsupervised daily and many of the rest of us were allowed to do adult things far too early.  Illegitimacy got a good running start, and

"[i]n the middle 1970s, the distinction of occupying America's most poverty-prone age bracket passed directly from the (elder) Lost to the (child) 13th without ever touching the three generations in between.  By the late 1970s, the child suicide rate broke the Lost's previous turn-of-the-century record.  Through the Awakening, the homicide rate for infants and small children rose by half, and the number of reported cases of child abuse jumped four-fold."

Does anyone remember this?  You'd think, from the coverage in the media, that teen suicide was just discovered in youth.  Oh, no.  Gen Xers broke the record back there, but it's all just lost in the ether.  Reading all of this I realized for perhaps the first time that other generations hadn't had this experience.  I mean, I knew that divorce and illegitimacy climbed and climbed through the 60s, 70s and 80s and that families fragmented and got poorer in general.  What I never considered was that for the first time in history, that fragmentation was largely an optional choice that the generations before us could and did make.

Families have always broken up.  Death was an ever present companion in human society, and it was not at all uncommon for one or the other parent to die and then remarry to keep the family solvent and functional.  These arrangements sometimes worked and sometimes didn't, people being people.  There have always been kids who were raised by their grandparents or aunts and uncles.  Because their parents died.  As in, keeled over, went 10 toes up.  But with the advent of modern medicine and especially drugs like penicillin, the incidence of parental death was drastically reduced.  Boomer kids feared polio, not smallpox or typhoid or tuberculosis.  The kids in Gen X experienced family breakdown, then, because their parents flaked, because they put themselves first, because the kids in our generation weren't "worth the parental sacrifice of prolonging an unhappy marriage." 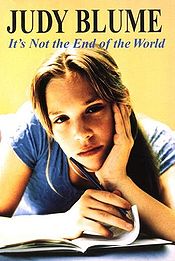 Wow.  Thanks.  The adults around us preferred to deal with the divorce epidemic by producing after-school specials and writing stuff like It's Not the End of the World rather than pressure Silent and Boomer parents to stick it out for the kids.

And you may ask me, "grerp, why are you so angry about this?  Your parents stayed together.  You weren't a child of divorce."  And that would be true.  My parents didn't divorce, and I had a stable, protected childhood.  But my friends had parents who divorced and went through that nightmare in front of me.  What do you say to someone you know and care about when their parents pancake?  "Gee, I'm sorry your family is toast, and you only see your dad every other weekend, and your new stepmother treats you like an interloper?"  "I'm sorry your mom decided having a new boyfriend was more important than seeing you every day?"  One of my friends crashed and burned in college over her parents' divorce, and she was 20 and not even living at home any more.  What can you say when you watch someone's family fracture and you see your friend mourn it while being told nothing truly terrible happened?  It happens all the time, after all.

My teachers got divorced.  The guidance counselor at my middle school got divorced and then killed himself.  He had lived in my neighborhood, three doors down.  It says something when the person who is hired to shepherd the youth into making better decisions decides checking out permanently is better than staying around for his young daughter.  Seriously, where was the adult behavior?  It wasn't there in real life, and it sure wasn't there on television where Three was Company and divorced moms took it One Day at a Time because they had no road map for this brave new world.


I would be interested in reading a list of the novels and screenplays Strauss and Howe referenced above:


...this generation's novels and screenplays bristle with hostile reference to parents who didn't tough it out.

They are right, that sentiment exists in Gen X's thoughts and words.  The song Wonderful by Everclear expresses a child's anger and betrayal in the clearest, boldest, most unapologetic way.  Art Alexakis wrote it when he got a divorce as a way to work out what he was putting his daughter through, but also, clearly, as a way to process his own feelings about his parents' divorce years ago.

I close my eyes when I get too sad

Art Alexakis is not a man who has it all together.  He is not much of a role model, and his wisdom is limited.  But he has managed to clearly express what Gen X kids felt then and still feel now and get it out to the general public with whom it resonates.  In one internet forum a commented said about Father of Mine:


"First song I ever heard during which I had to stop my car because I was crying.  Very powerful and descriptive of a lot of kids of divorce.

Alexakis wrote that song when he was 35 years old.  Not fifteen.  The pain stuck around.

As a generation we've been hearing for years and years about how divorce was so necessary because of all those women trapped in loveless marriages with horrible men.  How could they be condemned to a lifetime of unhappiness?  Too cruel!  Legal, no-fault divorce freed women from mistakes that went toxic.  No one could possibly have wanted them to stay with men who [insert action here].  The inhumanity!

And it is true that many women did marry bad men who treated them, well, badly.  And they were unhappy, some of them very unhappy.  But the flip side of that situation, the one we never talk about, is what happened to Art Alexakis.  His father, who by Alexakis's account was not a good husband, who took his anger out on his wife physically, who - by our modern standards - would be a get-out-of-marriage-free kind of husband, walked out and didn't look back.

And everything did not get better.  It got worse.  Way worse.  The family struggled financially and broke up further.  Both Art and his brother George got addicted to drugs, and George overdosed at age 21, after several stints in jail.  Art tried to kill himself, became a juvenile delinquent, went to jail, barely survived, married and divorced multiple times.  Perhaps Mrs. Alexakis was glad to see the back of Art's dad, but the Alexakis' kids outcomes nosedived, and for 1 of the 5 Alexakis kids it actually was a long, drawn-out End of the World.

Gen X is made up of kids who were told by word and action that the happiness and well-being of the adults in their lives was more important than their happiness or well-being.  And many of us are tired of the unhappy housewife meme.  We are tired of being told to be grateful for the freedom, to be glad we didn't grow up in the oppressive climate of the 1950s.  Plenty of Gen Xers (and Gen Ys) would have traded the "liberation" given them for Mom and Dad living in the same house and dinner being on the table regularly at 6 PM.  We can't appreciate rebellion against security and authority because security and authority were scarce resources in our childhood.

I'll continue this series with other thoughts gleaned from The Fourth Turning, but just for the above, the explanation for Gen X's anger, apathy and cynicism, I am grateful to the authors.  We don't feel the way the Boomers feel because we didn't grow up the way the Boomers did.  Even those of us growing up in stable homes could feel society splintering all around us, and we wondered if and when our parents would decide to chuck it and go find themselves.
Posted by grerp at 7:09 PM