Piece of Advice #67: Admit when you're wrong

To err is human.  Humans are experts at getting things wrong, doing wrong things, and/or otherwise messing things up.  We estimate, extrapolate, or interpret things on a regular basis in order to get things done.  We observe and dissect our friends, family and coworkers in an effort to get along with them more effectively (or better manipulate them).  We react continuously to our neighbors and surroundings based on varying amounts of information, and we constantly misread the data.  Sometimes it isn't a big deal.  If you guess wrong on how much paint you need to touch up your bathroom walls, you run to the hardware store and buy some more.  If you guess that rush hour traffic will ramp up at 5 PM and it actually begins earlier, you sit in traffic for a bit.  But if you misinterpret someone's emotions, intentions or situation and react based on those wrongly interpreted cues, you will very probably anger them, hurt them, or degrade your relationship.  The best thing to do is just admit that you were wrong.  And then apologize. 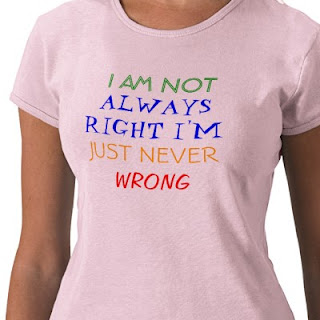 This sounds really simple.  It's amazing then that more people don't do it and will instead make myriad excuses for why they were really right or why even if they were wrong, the situation merited an explosion of temper.  Pride.  It's all pride - which is a built-in to the human condition, but as our culture becomes simultaneously more individualistic and narcissistic, it's actually cool now to be wrong and refuse to admit it.

(A side note: I have to wonder if the punctuation omission on this t-shirt is intentional and ironic.)

Whatever your reason, refusing to admit it when you're wrong and, worse, when you have hurt someone by being so, is immature and selfish.

The easiest and fastest way to diffuse an angry situation in which you are at least partially at fault is to say, "I'm sorry.  I was wrong.  I shouldn't have _____.  Will you forgive me?"  These words will calm down nearly any reasonable person and some unreasonable ones as well.  Often they will be open to discussing how they might have also contributed to the situation, if you take the first step in admitting responsibility or culpability.  Insisting that you are right and that the other person has offended does the opposite - it ramps up the anger and the defensiveness and keeps all involved parties from addressing any underlying problems and solving them.

Part 1 of admitting when you are wrong is, of course, continuously scrutinizing your own behavior and not giving yourself a pass because, well, it's you.  Also you have to refuse to use excuses such as, "I was tired" or "I was hormonal" or "I had a hard day."  Everyone has hard days, and all women are sometimes hormonal.  Neither of these are a reason to abuse other people.  If you do, you should apologize.  Scrap your pride and say, "I had no call to treat you that way.  I'm sorry."

We all fail.  We all say things that are uncalled for or unkind, and this isn't going to change.  But accepting that as fact and accepting it as a satisfactory excuse are two different things.  We owe the people around us at least the attempt to be our best selves.  If you fail at this, apologize.  It will go a long way to diffusing anger and bitterness and keeping your relationships strong and healthy.
Posted by grerp at 9:18 PM