Piece of Advice #49: Get some experience with children

When I was a teenager I spent hundreds of hours taking care of other people's kids.  I volunteered at church in the nursery and babysat practically every weekend (at $1.25/hr, can you believe it?).  The summer I was sixteen I worked full time as a babysitter, whiling away the long summer hours entertaining an eight year old.  By the time I was twenty, I was seriously down with kids - babies, toddlers, elementary school kids, tweens - I'd logged the time and I was reasonably adept at caretaking, entertaining, diverting, and maintaining order.  If you'd sat me down at a table with a shy or sulky three year old, I'd have picked a spoon and asked her to tell me if her reflection was right side up or upside down and then flipped it and asked again.  Flip, flip. Concave, convex.  Magic.

Because I had this experience when I went to work as an English teacher in Russia, I did not panic when they gave me a schedule full of different age children: 1st grade, 3rd grade, 6th grade, 9th grade, 11th grade.  It was a challenge coming up with suitable lesson plans for all those different ages, but I wasn't totally unfamiliar with what was developmentally appropriate or what worked with what age.  Later I found a job as a children's librarian and had no problem switching gears from preschool to teen interaction at a moment's notice.

Now, not everyone wants to work with kids, and that's fine.  But this background meant that when I finally became a mother, it wasn't nearly so overwhelming as it is for many new mothers.  Sure, I consulted reference books about developmental milestones, and I called my mom if my son got a strange rash or ran a high fever, but I had no problem becoming comfortable with my kid because I was comfortable in general with kids.  I knew how to play tickle and peek-a-boo and I had a whole repertoire of silly songs including some I made up myself. 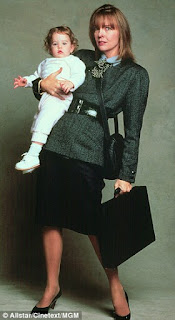 It seems strange to me that we as a society are proud of producing women who don't know how to change diapers or talk to babies or distract a toddler from the tantrum he's about to throw.  Or, even worse, producing women who don't want to have children at all.  I don't think it's odd for women not to relish the idea of diapers or midnight feedings, but what kind of self-loathers do we have to be as a culture to be programming our daughters to believe that motherhood is drudgery or "detrimental."  Motherhood is the de facto state of women and has been for thousands of years.  It's why we're here: to produce and raise the next generation successfully so that they can produce and raise the next generation successfully.  Sure, it's hard work and can be relentless and thankless, but what job isn't?  And I've never had a cheetos fight, made up dragon stories, or exchanged PB&J smeared kisses with any of my other bosses or coworkers.

Getting that experience may be more challenging for you than it was for me.  I realize that girls do not babysit now the way they babysat when I was a teen, and families are smaller than ever, so you probably won't get it at home.  But volunteering is still an option, as is babysitting for friends.  Not all kids are pleasant to be around, but if you spend enough time with children, you may find that your perspective on the world changes.  It's harder to be a brutal cynic when you're with someone who finds blowing bubbles rapturous and fart jokes endlessly funny.  You may even start to want some of your own.  My advice is to start earlier rather than later on that.  Don't feel like you are wasting all your opportunities if you decide to be a mother early.  Motherhood is an opportunity and a learning experience, and there will still be time for outside aspirations when your kids get to be a little older.
Posted by grerp at 8:10 PM